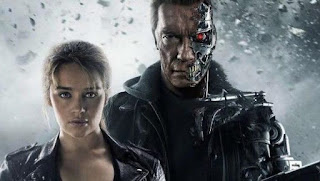 That was freaking awesome. The new Terminator movie starts off just before the original one then goes back to the beginning and remixes it with alternate timelines. Schwarzenegger plays a good Terminator programed to protect Sarah Connor. It is very well done. John Conner takes one look at Schwarzenegger and says he looks old. I've never seen an old Terminator before. They said the human flesh on the outside of the machinery ages but the machinery doesn't. Schwarzenegger's motto is I'm old but not obsolete. Baby Boomers still rock. Old school is better than no school.

There are a few good movies coming out soon. The new Star Wars saga kicks off this Christmas. Stallone is coaching another young gun in an inspiring movie called Creed. He's training the son of Apollo Creed. In the preview the son says he once heard it said that it doesn't matter how hard you can hit in life. It matters how hard you can get hit and keep movie forward. How true. Lots of new things on the horizon. Looks like we're ready for war souljas. Stay tuned.