Satellite picture of BC Forest Fires 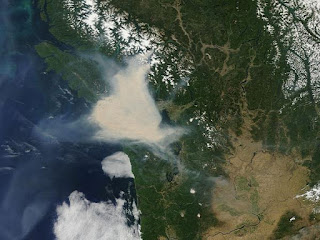 News 1130 is reporting that An Air Quality Advisory has been issued for Metro Vancouver because of the smoke from wildfires outside our region. This is why Metro Vancouver should not build a garbage incinerator. The Fraser Valley is a valley. All the smoke lingers in the valley affecting the air quality for the whole region.

News 1130 is also reporting that One man was has minor cuts after a gunshot shattered his window in Surrey. Police believe it's was targeted. The investigation is ongoing.

Update: The forest fire thing is actually a bit creepy. After being sunny for so long we finally have some cloud cover. Only it's not clouds, it's a thin veil of smoke covering the whole sky. This morning on the way to work the sun looked reddish orange. The Vancouver Province is reporting that several of the fires have been started by cigarettes. The smoke in Whistler appears to be worse. The smoke there isn't high in the sky it's low and guests are wearing dust masks.