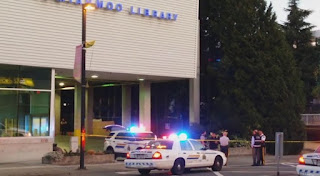 CTV is reporting that "at about 2:30 a.m. Saturday, police responded to reports of a suicidal man yelling on the streets in the city’s south end. Officers found the man and a 'physical struggle ensued,' the RCMP said in a statement. An officer shot the man, who died from the wound. One of the officers involved was also wounded by a gunshot, and transported to hospital with non-life threatening injuries. The RCMP said the officer is expected to be released later today. It is unclear who shot the officer, and the RCMP said the circumstances of the shooting remain under investigation." From the picture it was outside the Fleetood library.

1130 News is reporting that "Surrey Mounties were called out around 2:30 to reports of the man screaming outside an RCMP detachment office on 152nd Street near 18th Avenue." Tell me the cop wasn't shot by the other cop by accident.

News 1130 is reporting that the police found a dead body in Vancouver last night in Andy Livingstone Park around Expo Boulevard and Carrall Street. Police believe the man was the victim of a homicide.

The Abby News is reporting that "Five bullets struck a residence in Abbotsford early this morning (Saturday) but nobody was injured."