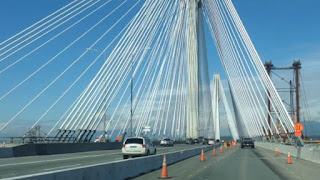 Did you see what they did to the new Port Mann bridge? They totally screwed it up not once but twice. It used to be pretty straight forward. You cross over the bridge and take the exit to Coquitlam. Now the Coquitlam exit is before the bridge and they have partitioned off two entire lanes across the entire bridge just for that exit.

Now they've done the exact same thing for the Surrey exit on the other side. That is the most ridiculous thing I have ever seen in my entire life. They have this magnificent multi lane bridge and they screw it up with insane partitions on both sides of the bridge. This is the prime example of putting someone in charge who has absolutely no idea what they are doing.

Kinda like tearing down the new multi level parking lot at the Surrey Memorial hospital they just built only to build a new parking lot. Your tax dollars hard at work. Not.