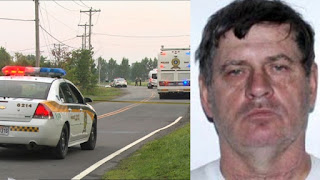 CBC is reporting that Wednesday around 6:00 PM there was a shooting in Marieville, Quebec 30 kilometers east of Montreal. Two men were shot dead, one was injured. The slain men have been identified as Marcel Hémond and Michel l'italien. The injured man was identified as Eric Choquette.

"Quebec provincial police told reporters this afternoon they found the body of a man in a car about 45 minutes from where the shootings took place. An autopsy will need to be conducted to confirm the man's identity, but the Sûreté du Québec believes it is the body of the 59-year-old murder suspect, Daniel Massé." OK that's somewhat bizarre. They murdered their hit man after he did the job? Sounds a bit like the Christmas in Vancouver 1995.