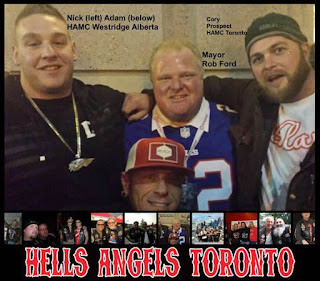 Sadly, numerous media outlets have confirmed the victim's sister's report on this blog yesterday morning that the person three Canadian members of the Hells Angels beat into a coma in Greece last month has now died as a result of those injuries.

The Edmonton Journal is confirming my previous report that the two Edmonton members are Nick Dragich, who posed with Rob Ford when he was mayor of Toronto, and Dusty Swanson, a prospect from the Dirty Flu. Kim Bolan is confirming my previous report that it was the same Nick Dragich posing with Rob Ford on the Toronto Hells Angels web site. Kim Bolan is also reporting that the third Canadian member, a nomad from Red Deer Alberta, is Brent Koziak.