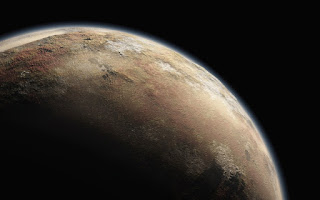 Vox dot com is reporting that "At 7:49 am ET today, the unmanned spacecraft flew within 7,750 miles of Pluto, taking high-resolution photos of its surface and collecting all sorts of scientific data. But we won't see any of these photos until Wednesday afternoon because the craft will be focusing on data collection — not transmission — during the brief flyby."

Nasa released this image right before the fly by. It took nine years for the spacecraft to get there.

I didn't realize Pluto lost it's planet status in 2006.