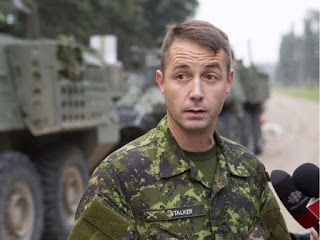 The Edmonton Journal is reporting that "a decorated Afghanistan war veteran and Edmonton infantry battalion commander is facing numerous sex-related charges for offences involving a teenage boy that allegedly occurred while the officer was a mentor with a local army cadet corps."

These are unproven allegations of course yet they are indeed serious allegations. So we have Catholic Priests, Protestant Ministers, Hockey Coaches, Football Coaches, Boy Scout Leaders and now Armed Forces Commanders. Rape is a heinous crime. Predators come in many forms.