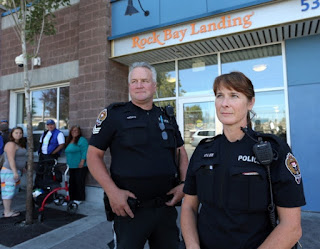 The Times Colonist is reporting that "Victoria police have charged 16 people after an undercover sting targeted drug dealers who were selling around homeless shelters. The six-week operation, which wrapped up on Wednesday, was in response to a dramatic increase in aggressive drug dealing in front of the Rock Bay Landing shelter on Ellice Street and Our Place drop-in centre on Pandora Avenue. Police found the bulk of the drug dealers were linked to a street-level gang that uses violence and intimidation."

“The level of violence had increased to such a degree that we weren’t just hearing from the service providers, we were hearing from the clientele, who said: 'I’m not going by the shelter anymore — it’s too dangerous,' ” said Insp. Scott McGregor, who heads the department’s downtown beat and bikes unit, which carried out the operation. Don McTavish, Cool Aid’s manager of shelter programs, said a few months ago, staff at Rock Bay Landing noticed a group of drug dealers hanging out on the block who refused to leave. The situation was so bad that some clients felt unsafe using the shelter, he said."

“Where we have to draw the line is on violence, on trafficking, on the aggression that makes the whole neighbourhood unsafe, McTavish said. McGregor said it’s intolerable to see opportunists profiting off of the illness and sickness of some of the people who have to access these facilities.”

This is exactly what's happening outside a homeless shelter in Surrey called the Front Room and in the DTES. Only it has been going on there for years. Insp. Scott McGregor mentioned service providers. He's referring to the sex trade workers there who are being brutalized by these predatory drug dealers as we speak. This is where the drug dealers are the pimps. They give the sex trade workers crack then take all their money when they get a trick to pay for the drug. There is nothing consensual about it. It is human trafficking and exploitation.

Ya see, not all cops are bad. Not all bikers are bad either. We need to set aside the stereotypes and confront the violence at it's root cause. That is the New York Model.