Alaska and Oregon legalizes pot for recreational use 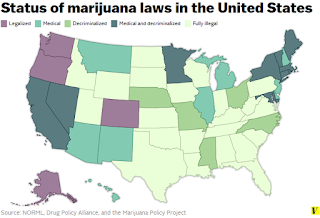 I'm shocked this didn't make big news locally. I was speaking with a guy from Oregon today and he said they legalized pot there July 1st 2015. Although smoking pot in public is still illegal in Oregon, the International Business Times is reporting that you can even take it on your carry on luggage for domestic flights within the state. Their referendum was November 2014.

I totally missed Alaska. CNN reported that Alaska legalized pot in February 2015. It has also been confirmed by Time Magazine. We all knew Colorado and Washington State voted yes while California voted no but Alaska and Oregon is new news. Once again just because they did doesn't mean we have to. California didn't. It's just news so to speak.

I'm not a big fan of the legalization of pot. Way too many people smoke way too much pot as it is. Teens shouldn't smoke pot and smoking pot while driving is insane. I do support the decriminalization of pot. Legalization of crack or crystal meth is complete social irresponsibility. We need to decriminalize pot so we have the resources to deal with hard drugs like crack and crystal meth. We need to arrest the crack dealers not the addicts. That is the New York model.