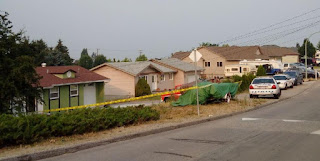 The Vancouver Province is reporting a homicide in Kelowna. Global is reporting that it was on Feedham Avenue in the Black Mountain area. Both reports refer to it was a targeted attack. Global is also reporitng that "A neighbour tells Global News the victim is Amardeep Singh Ahluwalia and that he had been tied up with zap straps before being killed. The neighbour also says the victim’s girlfriend, a nurse at the Kelowna hospital, was similarly restrained but not hurt. She escaped from the house and ran next door for assistance. The unconfirmed reports indicate the dead man was found face down in the bloodied kitchen and the home had been invaded and ransacked."

That is messed up. Global is also reporting that Daniel Garth Ruff, 62 was arrested Monday for the murder of 51 year old Warren Welters in Kelowna June 14th.

The Vancouver Province is also reporting a targeted home invasion in Surrey 1:30 AM Tuesday.

CBC is reporting that human remains found in an industrial complex near Whistler, B.C. June 14th have been identified as missing Australian teen Jake Brian Kermond.

Update: The Vancouver Province is reporting that the victim who was killed in this targeted attack, Amardeep Singh Ahluwalia, is the brother-in-law of B.C. MLA Amrik Virk. Same last name as Bobby Virk from the Bassi-Virk trial connected to drug trafficking in the BC Rail scandal.