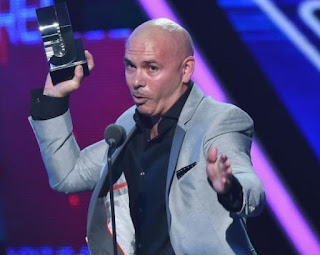 News 1130 is reporting that Pitbull called Donald Trump out at Premios Juventad, the Spanish-language awards show that aired Thursday on Univision. The channel dropped Trump’s Miss USA Pageant after his comments about some Mexican immigrants being rapists, criminals and drug dealers. Donald Trump is a piece of garbage. After making those outrageous comments he should have stepped down. Instead he leads the Republican nomination. That is a shameful disgrace that has diminished all of us.

CNN is reporting that polls indicate Trump leads over Jeb Bush. Jeb Bush? Are you kidding me? That's not just Dumb and Dumber. It's dirty and dirtier. Al Martin testified that Jeb Bush instructed him to commit investment fraud to raise funds for Iran Contra. Pitbull is right. The Latino voters and the rest of us need to rally together and support Marco Rubio. Jeb Bush and Donald Trump are bad news for the world of economic prosperity. Mr. 305 - we salute you.