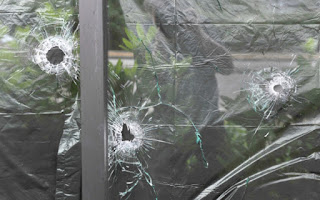 #Surrey #RCMP are investigating a report of multiple shots fired into a building at 18700 Fraser Hwy. No reports of people hit. CTV is confirming that COBS Bread in the 18800 block of Fraser Highway was shot at just after 2 a.m. Sunday. One worker was inside the bakery at the time but wasn’t hurt. 24 hr News has some pictures.

The Vancouver Province is reporting that there was another one a few blocks over on Highway number 10 where gunfire was exchanged between vehicles and two residences were hit although no one was hurt 10 PM Saturday.

The Vancouver Province is reporting that The Highway 10 shooting occurred just a day after another targeted drive-by shooting in the 5700-block 152nd Street on Friday night that left two men injured. The men were sitting outside their home when more than 30 rounds were fired at the house, one bullet grazing one man in the head and another hitting the other man in the foot, said a relative. A dark-coloured sedan was seen fleeing the scene.

The Vancouver Province is also reporting that there was another shooting in Surrey Sunday night which resulted in a fatality. OK I had this one backwards. Kim Bolan is reporting that someone was shot trying to defend their home. I thought the person defending the home shot the intruder. It's the other way around. Perhaps now is a good time to get rid of gun control.