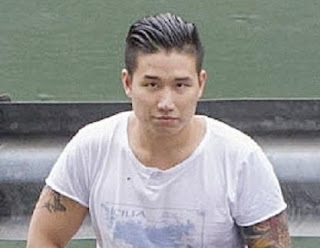 The Vancouver Province is reporting that Jeffrey Chang has died in hospital after was found unresponsive after midnight in Pitt Meadows. Another baby is now going to grow up without their father. Tragic. A good looking young man who was loved by the mother of his child now dead. For what - greed. If you stop the greed, you stop the violence.

Kim Bolan is reporting that sources told the Vancouver Sun that his death is a suspected drug over dose. Although the Maple Ridge Times is reporting he was found inside the house unconscious, that is still very suspicious. Lars in Kelowna plead guilty to hitting someone over the head with a baseball bat in Halifax then injecting him with a lethal dose of cocaine. Larry Pace (Lars) served ten years for accessory to murder.

Jeff was shot in the hand during a drive by at a gas station in East Vancouver June 2014. The Vancouver Province and the Maple Ridge Times are both quoting Kim Bolan referring to Jeff as a member of the Wolf Pack. Kim Bolan was the one that made the reference at the shooting last year. It was timely because that weekend saw two rivals shot at.

Kim Bolan stated that Jeff was associated with the Wolf Pack and Thanh Tung Tran, who was also shot that weekend was "a long-time drug trafficker connected to Billy’s Crew and the Dhak brothers – known rivals of the Wolf Pack." OK so Billy's crew, that would be UN Billy who has also been charged in the Kelowna shooting that took out Jonathon Bacon.

I cringe whenever I hear the term Cub Pack. It refers to the Hells Angels association with the Bacon brothers who were responsible for the Surrey Six. No one in their right mind would want to be associated with that. Wolf Pack 81 was one of their gamer tags on X box live.