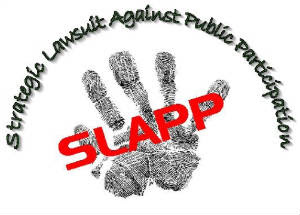 As we have discussed, large corporations can sue or threaten to sue individuals based on fraudulent copyright claims to censor the Internet. Likewise, the civil courts can and have been misused to bully and censor the Internet. Previously one blog reader referred to this process as a slap suit. Another way the rich bully the poor. Another blog reader explained from Wikipedia:

"A strategic lawsuit against public participation (SLAPP) is a lawsuit that is intended to censor, intimidate, and silence critics by burdening them with the cost of a legal defense until they abandon their criticism or opposition. The typical SLAPP plaintiff does not normally expect to win the lawsuit. The plaintiff's goals are accomplished if the defendant succumbs to fear, intimidation, mounting legal costs or simple exhaustion and abandons the criticism."

Consequently, the public is engaging in conversations trying to lobby lawmakers to adopt legislation to respond to this kind of censorship. Ontario established an Anti-SLAPP Advisory Panel that the public contacted with their concerns. The panel released it's recommendations in 2010 and the Ontario Government responded by adopting an Ant-SLAPP bill, "The Protection of Public Participation Act" in June 2013. BC needs this. Michael Geist is a good person to follow. 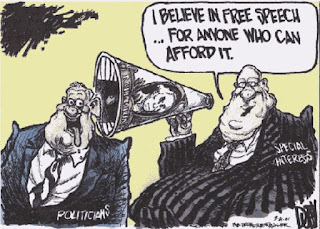 Judges are paid with tax dollars and are employed to protect the public interest not betray that trust. They claim that civilians don't know the law like they do. In reality they elect the governments that make the law. The intent of the law is to protect civilians not enslave them.