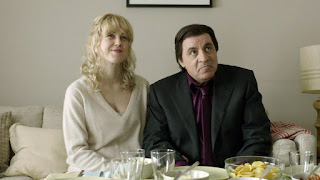 As I previously mentioned I have been enjoying a Netfilx TV series called Lilyhammer. It's about a New York Mafioso who moves to Norway after getting shafted by a rival. He picked Lilyhammer after seeing it on the Winter Olympics. It's a fun series because it was actually filmed in Norway with a Norwegian cast. Most of it is in English but parts are in Norwegian with English subtitles making it all that more realistic. The Rolling Stone ran and article about it.

Johnny, the New York Mafioso meets a nice Norwegian woman and has a child with her, actually twins. Only she gets fed up with Johnny's secret business transactions and kicks him out. Torgeir is a fun character that rises up to become Johnny's right hand man. He eventually meets a girl and as they prepare for her to have a child he starts to reconsider whether or not he should leave the game so to speak and focus on starting a new life as a Dad.

At first Johny says I'm sorry but I can't accept your resignation at this time. The only way you can get out of this business is horizontally. Then they end up having to kill one of their former associates who screwed up. Killing bad guys is pretty easy but killing an innocent person or a decent guy who screwed up is an entirely different matter. After that incident Torgeir lost the wind in his sails and once again asked Johnny to retire. This time Johnny said yes and let him retire on good terms.

We used to have a saying here. 81 in 86 out. Now that's not so much the case and many people have been able to retire in good standing. The key thing is once you retire, keep your mouth shut and start a new life. If you become an informant no one can protect you.

TBM Fresh Start has a good thing going. They are big in Scandinavia. They are well established in Denmark, Norway and Sweden. They actually have a series of safe houses like the RA in Ireland did to protect people who want to leave the gang life. I had sincerely hoped to be able to get involved with them in Canada. Unfortunately my resources are tapped out and I have to focus on paying my own bills right now. Yet if anyone else wants to rise to the challenge and help them set up here in Canada please feel free. As individuals we can't do everything but we can do something.