Hells Angels and the Finks in Australia 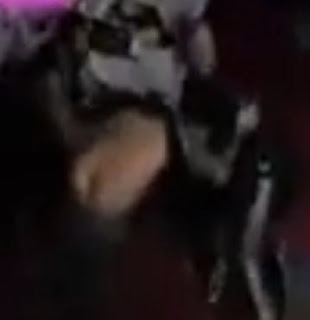 For those of you who don't understand the Hells Angels butt crack photo, I shall explain. Once upon a time there was a fine land down under filled with fine brave people like Rolf Harris, Steve Irwin and Mic Dundee. Their valor was tried tested and proven at Gallipoli.
There was a local biker club called the Finks. The Hells Angels came to their town and said support our tax and pay our dues or leave town. The Finks told them to fuck off. The Hells Angels bribed one of their members with a new Harley to cross over and defect. The Finks were pissed.
The Hells Angels showed up at a martial arts venue wearing colours with their new turncoat recruit and the Finks lost it. A fight broke out and the turncoat was shot. His name was Chris Hudson. This is a video clip of the fight that broke out. You can hear shots fired but you can't see who the shooters are.
Ever since then the angry Chris Hudson always carried a gun. Clearly steroids don't make you bullet proof. Not only was Chris Hudson a turncoat, he was a woman beater as well. He was seen beating his girlfriend in public and dragging her by the hair. A lawyer and a Dutch backpacker came to her aide. Hudson pulled out a gun and shot all three emptying the clip on the dying lawyer who was a father of three.
Earlier that same day he was seen at a club grabbing a stripper by the hair. A local confronted him and said that was not on. Hudson lifted up his shirt showing his Hells Angels tattoo and said, "Don't you know who I am? I am a Hells Angel." He then dragged the stripper out of the club by her hair, threw her to the ground and kicker her in the head while she was on the ground.
Some say the Hells Angels disciplined him by burning off his tattoo with a blow torch. Others say Hells Angels came to his trial, saluted him and visited him in prison. His father even went so far as to tell the media that he spoke with the Hells Angels and they still support him.
The butt crack photo is a screen clip from the original fight with the Finks where Hells Angels colors were ripped off a member's back and exposed a rather nasty butt crack.
I came across the story after reading the sheriffs blog in Australia which has been taken down. They may have shot the sheriff, but they didn't shoot the deputy.
.
The blog mentioned a case where a group of high ranking Hells Angels and associates kidnapped, gang raped and tortured a stripper on a pig farm for several days. It was a horrific tale where the victim was awarded compensation for her injuries but no one was ever tried or convicted despite the fact that everyone there knew who it was.
This is why people like to shoot the Hells Angels and blow their shit up. That kind of evil is not noble. Ned Kelly was a famous Australian outlaw. Yet there is no way Ned Kelly would allow that kind of horrific depravity to continue. Neither should we. Rat out the real rats and make this world a better place.