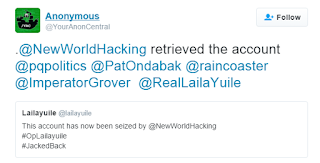 CKNW is confirming EAF's report that Laila Yuile's blog and twitter has been hacked. Laila is a well known Surrey blogger that now also writes for newspapers. CKNW is reporting that her blog and twitter was hacked by someone who claims to be from the group “Anonymous” but Laila doesn't think it really is someone from that group. She's right. That is the core of the conflict. This is a corporate hack impersonating Anonymous. Can we say false flag now?

Every crime has a means and a motive. Does Anonymous have the means to hack Laila's blog and twitter? By all means. Do they have a motive? Not on your life. Think about it. Laila has been vocal about the Site C Dam. The hack happened last night after her last blog post about the project. Why would Anonymous want to shut that blog down? They wouldn't. One of their own guys was shot dead by a cop in Dawson Creek protesting the Site C Dam. Anonymous didn't hack her blog. Someone pretending to be anonymous did.

So what does this mean? It means that group of hackers "fighting" ISIS and hacking Donald Trump's web site are not really "Anonymous" they are *someone* else. So now we have a group of hackers working in support of the CIA's corporate agenda pretending to be anonymous when they aren't they are on the agency's payroll. Buyer Beware.

Personally I don't have a problem with the Site C dam. Other than collecting water for fracking. I'm from Vancouver. Hydroelectric power has served us well: Take a look at the Cleveland Dam. Alouette Lake, Stave Lake, the Seymour watershed in addition to the Capilano watershed are all green forms of energy that serve us well. Hydroelectric power is a lot better than nuclear reactors. I do however, support people's right to protest the project and agree that this kind of censorship diminishes all of us. Perhaps valid concerns with the project include the size of the dam and the amount of area it will flood as well as the cost of the dam. Both of those seem excessive.

Note: The Twitter post says @NewWorldHacking retrieved the account. I'm not sure if that means anonymous has hacked it back for her or what. However, if they had hacked it back for her they would have given it back by now. The fact that it is still offline is very suspect. If they hacked her second twitter account which is what the twitter post implies, then they are the fraud falsely representing Anonymous and everything that account does is suspect.

Posted by Dennis Watson at 6:29 PM