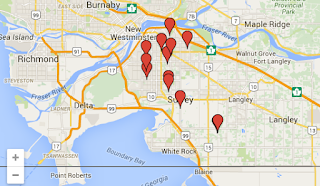 Kevin Diakiw from the Surrey Leader is reporting that "Shots rang out in Newton again this week, bringing to 10 the number of confirmed shootings this year in a city recoiling from continued gun violence." That's almost a shooting a week.

Update: CBC is confirming a Scan BC is reporting that: @SurreyRCMP confirm shots fired near 132nd Street this morning. Believed to be targeted. People in the home are known to police.

2nd Update: Kevin Diakiw from the Surrey Leader is reporting that there was a shooting 7:30 p.m. on Tuesday in the 10800-block of 143 Street. This would be Surrey's 12th shooting so far this year, representing a shooting every six and a half days. It's all OK though. Bill Fordy did such a great job dancing naked in front of his coworkers they gave the clown a promotion.

The Saga Continues: Castanet is reporting that "shots fired in the area of 128th Street and 56th Avenue in the Panorama Ridge neighbourhood. Reports of gunfire came in just before 1 a.m."

Welcome to the wild, wild west.

East Van: Global is reporting that there was a targeted shooting in the East Vancouver area March 26th. One person was hit, but his injuries are non-life-threatening.