The 100th anniversary of the Easter Rising 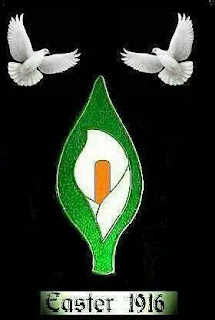 This Easter marks the 100th anniversary of the Easter Rising. No, I'm not talking about the resurrection of Christ. I'm refering to an uprising in Dublin that happened in 1916. In the North, Irish Republicans (people who believe in a free republic) wear an Easter lily to commemorate the event. Aside from blooming at Easter, the Easter lily is white green and orange - the same colours as the flag for the Republic of Ireland. Orange represents Protestant, green represents Catholic and white represents peace between the two.A noble model indeed.

The actual Easter rising lasted from April 24th until April 30th 1916. Easter comes early this year. The beginning of the movie Michael Collins with Liam Neeson is a good explanation of what happened. A group of rebels took up arms and seized the main post office in Dublin and shot it out with British troops. They eventually surrendered but seven of the leaders signed their names to an eloquent proclamation similar to the American Declaration of Independence and were executed by firing squad. They asserted their inalienable right to freedom and were executed for doing so. They signed their proclamation to the world with their own blood. Although the event failed, it put the dream on paper and rallied the public in it's support.

The movie Michael Collins was an excellent explanation of how Michael Collins helped organize a follow up rebellion and how he was ultimately shafted by being sent to England to negotiate a settlement. He came back with a compromise. It wasn't a free republic for all of Ireland like they wanted, it was a stepping stone to that end. It was the establishment of a free state in the south of Ireland with the promise of one day becoming a free Republic. The people were split. Some saw it as treason to give up claim to the north. That is why the song A Nation Once Again dreams about the day when Ireland long a province be, a nation once again. Ireland consists of four provinces. Ulster is it's own country and is still part of Great Britain.

Yet after going to England Michael Collins knew this was the best they were going to get at the time. Sadly, a civl war broke out over the division. Those who supported the treaty won and a free state was established which has now indeed become a free republic. Yet the north is as I said, still part of England and the struggle continued. Ian Paisley led a group of racist Protestants that would burn the tricolour flag and it's quest for peace and shout Ulster says No. When I was in Belfast in 88/89 they had a banner on the top of City Hall that coined that phrase Ulster Says No (to peace and a united Ireland).

The problem in Northern Ireland is similar to the Quebec conflict in Canada and the Ukrainian conflict with Russia. Half the people want to be independent and half the people don't. That is why conflict has rekindled in Northern Ireland. Some see Gerry Adams signing of the Good Friday accord in 1998 as treason just like they saw Michael Collins compromise as treason. Yet if we truly believe in democracy we have to recognize the existence of 50% of the population who don't want what we want. That is why there needs to be some kind of compromise. I'm not saying give up on the dream. I'm just saying lay down your arms and support the democratic process. By far the majority of the people in the north just want the violence to finally stop. It's not about Catholic versus Protestant. It's about learning to coexist in peace.