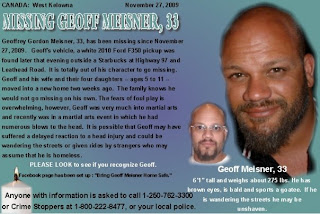 Speaking of MMA, Geoff Meisner from Kelowna is still missing. He was last seen in November 2009. Listening to his daughters disappointment Christmas morning is heart breaking.

There's a video clip of his debut fight in MMA. He's a very big guy and lost the fight but he seems to have had a very big heart. I don't know what he was involved in or what he knew but there are two remote items of interest.

The Hells Angels tried to recruit Joe Bralic for MMA and he ended up dead in a bud for blow deal gone bad in LA. The Hells Angels have recently expanded to Kelowna where East Van Hells Angel David Giles was acquitted of possession of cocaine for the purpose of trafficking. Yet 8 kilos of cocaine were seized and two of Giles associates were convicted.

The Hells Angels are a criminal organization and wherever they are, bad things happen. If you recognize Geoff and know anything about his disappearance, call crimestoppers: 1 800 222-8487 or text a tip to: CRIMES (274637) Ktown + Tip.

So who is Richard Goldammer? Kelowna has become the Hells Angels proceeds of crime retirement capital: http://www.castanet.net/content/1121907386923.pdf