What about the other 1%? 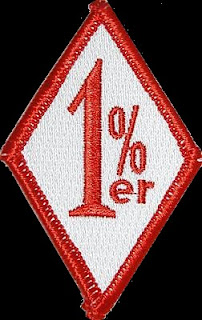 Growing up I was well familiar with the term 1%er. Only for us it had a different meeting. The biker I knew would use the term HD 1% referring to Harley Davidson motorcycles. To him, 1% meant cream of the crop not bottom of the barrel. It was a noble and elite status. Not everyone rode a Harley and not everyone was a real biker.
That was long before the Gypsy Wheelers patched over and long before Hells Angels came to Western Canada. Since then I have learned where the term came from. In response to a biker riot the American Motorcyclist Association back in the /60's said that 99% of bikers out there are law biding citizens who ride motorcycles as a form of recreation. He said 1% of the bikers out there are criminal, drug dealing deviants.
Low and behold the Hells Angels ran with it and proudly wore the 1%er banner boasting to the world that they were the bottom of the barrel criminal deviants. That was a very different version of the term than I was raised with.
So we have the top 1% and the bottom 1% but I want to know about the OTHER 1%. You know what I mean. We all know about the Dykes on Bikes. What about the male bikers who are gay? I know they exist. Most Hells Angels are so raging homophobic it's gotta make you wonder. What are they really trying to hide? 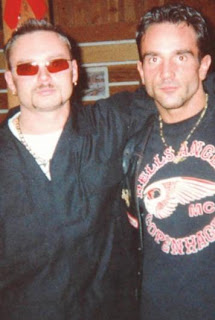 Take Hells Angels Nomad Normand Robitaille. He's in the photo on the right with Hells Angel Dany Kane on the left. They look kind of cosy. Dany Kane was Gay. His former lover was Aime Simard seen in the next photo taken while he was doing time at Kent in BC. He liked weights too. 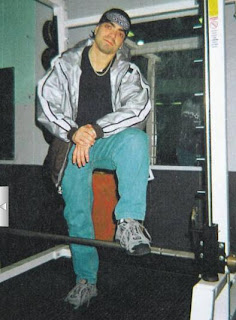 .
Danny Kane was a hit man for the Hells Angels. Aime Simard was a hit man for a Hells Angels puppet club called the Rockers. This article had the name wrong in the heading but had it right later on in the article. The Rock Machine were Hells Angels rivals. The Rockers were a Hells Angels puppet club that sold drugs for them in Quebec.
.
Dany Kane and Aime Simard were hit men, lovers and charged with a Halifax murder as well. They both turned informant and both were killed but my point is, there clearly are Hells Angels who are gay. 1% of them perhaps but they do exist.
.
My question is, when someone sports a 1% patch, which 1% are they? Bottom of the barrel criminals or just gay? Sometimes it's hard to tell. Come on, honk loud and be proud you 1%ers you.
Posted by Dennis Watson at 12:15 AM