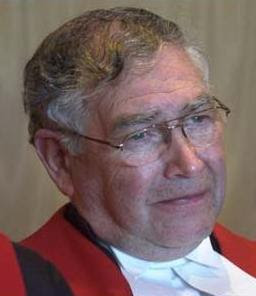 Patrick Dohm resigns at the mandatory retirement age of 75. I don't know much about his decisions but the Vancouver Province reports that he was assigned to the Air India bombing and the BC Rail Basi-Virk trial.

The Air India trial was a horrific travesty of justice. The only person convicted was one who plead guilty and was responsible for two bombings. Kim Bolan is much more familiar with that case than I am and wrote a book about it called "Loss of Faith: How the Air India Bomber got away with murder."

The Basi-Virk trial has been another huge Gordon Campbell cover up. Dohm himself signed the warrant for Dave Basi and Bobby Virk's offices and he apparently was the one who went through 32 boxes of files and decided what was privileged and couldn't be shown to the public.

The Legislature Raids: Dohm steps down. Now what?

Dohm was the one who removed Madame Justice Elizabeth Bennett from the BC Rail case and replaced her with Anne Injustice MacKenzie another gag order queen. That case has been one perpetual delay after the other shrouded in deleted e-mail and privileged evidence.

Let's hope Dohm is replaced by someone honest that believes in transparency and accountability. Many would argue that an honest lawyer is in itself an oxymoron. One skeptic once asked me at what point does a dishonest lawyer become an honest judge?

Others tremble at the very thought of daring to criticize a court judge despite the admonition of former Justice (William) Wallace Craig.

Some take great offence to my opinion that Peter Leask should he hanged for treason. On a matter of personal privilege I will clarify that statement.

It is my democratic right to vote in a referendum or opinion poll in support of Capital Punishment. Casting that vote is my democratic right and in no way implies that I have any intention of taking the law into my own hands and circumventing due process by executing a criminals who commits a crime that I personally feel would be worthy of capital punishment.

For example me saying Clifford Olsen should have been given the electric chair is not a threat and in no way implies that I have any intention of harming him or doing anything other than vote in an election or referendum. Having said that I personally see the problematic nature of capital punishment and don't see that as an answer. I do however, feel we need more accountability and should not go to the other extreme where former crimes worthy of capital punishment should now go unpunished.

In the past, treason was a crime worthy of capital punishment. I know a justice critic and advocate that wanted me to make them a web site at high treason dot com listing all the horrible decisions coming from BC judges. Since I already had a web site, I thought listing them in a Judges' Hall of Shame was good enough. Yet I agree with the premise. Some of these judges' decisions are so bad they border on treason and violate the constitutional pledge to provide public safety and uphold law and order.