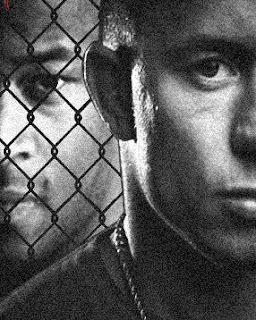 Georges St-Pierre's training partner David Loiseau has been denied a license to fight by the Quebec Athletic Commission due to his alleged "mob ties."

Hmmmm... mob ties - what does that mean? The problem seems to stem from Loiseau's involvement with XMMA that we know was taken over by Hells Angel associate Burton Rice.

Loiseau used to own XMMA and has maintained that once he left the company, he was unaware of what the organization began doing and that he was no longer a decision maker for XMMA. In essence, what they did was their business - he was focusing on returning to the UFC.

Nevertheless it could be just smoke and mirrors since one source claims the reason for the delay is because the police haven't responded with Loiseau's criminal record check yet. If they do and all is well then he could receive his license May 3. Business as usual.

Will the movie the Striking Truth contain the whole truth or just part of it? Don't get me wrong, I think David Loiseau and Georges St-Pierre are AWESOME. I just think the Hells Angels should leave them alone.

One can't help but wonder if Stalone wasn't taking a dig at promoters like Don King with his movie Rocky 5. MMA and Boxing both need to have the gangsters kept out.