Chuck Liddell and the Hells Angels 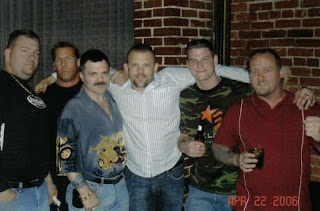 This is old news and I don't want to make a big deal about it, but I just want to flog a dead horse and emphasize my concerns and frustrations with the Hells Angels. First I want to say that Chuck Liddell is first class. Not just because he can kick my ass but because he has proven himself in the ring. It's no wonder the Hells Angels are attracted to him.
Rumor has it he spends time with the Hells Angels when he is in Vancouver. True or false it doesn't really matter. If he does that is his right. My concern is what about the other things the Hells Angels do that relate to criminal activity. Look at Australian rules football player Alan Didak. He hitched a ride with Hells Angel Chris Hudson when out clubbing. He was in the car when Hudson pulled out a gun and started shooting. Awkward.
. 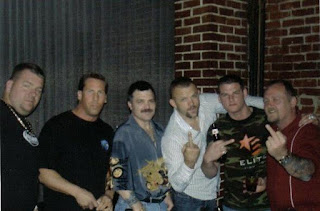 The photos of Chuck with some Vancouver Hells Angels reminds me of a kid getting his picture with Hulk Hogan. Somehow getting your photo with a WWF star makes you a star. Just because Chuck has had his photo taken with some Hells Angels doesn't really mean anything.
.
I'll admit Chuck's strange interview on Good Morning Texas sounded like he was wacked out on drugs but he was tested and passed. Chuck was tired and on sleeping pills. The bottom line is Chuck had a successful UFC career and retired with honour. Tito Ortiz on the other hand appears to be a bit of an asshole despite his competence.
.
The reason I bring this up is to illustrate some people of interest in the photos. In the first two photos we see cousins and friends Len Pelletier and Bob Green. Len is on Chuck's right and Bob is the second on Chuck's left. Len Pelletier is the Hells Angel who lives in a gated fortress in Langley who was shot at picking his kid up from high school. Bob Green is a director of Grant Street holdings which owns the Hells Angels Burnaby clubhouse.
. 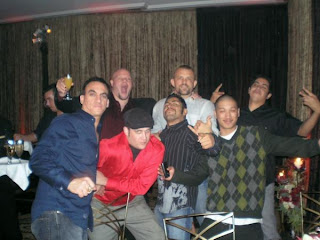 The second two photos has Rob Alvarez with Chuck Liddell. In the last photo Rob is on Chuck's right and in the second from last photo Rob is the person on the far left in the picture. Rob Alvarez was the guy who was kicking a bouncer while his friend Hells Angel Ron Lising sucker punched the bouncer as they butt in line at the Au Bar in Vancouver. My point is Chuck Liddell is better than these people. The Hells Angels should leave him alone and they should leave George St. Pierre alone too. There's a lot of talk on the Internet about how the Hells Angels are trying to get cozy with George St. Pierre.
.
Just remember that the Hells Angels went to Australia with the sole purpose of starting shit. They patched over a member of a local club called the Finks. The police say they bribed the guy with a new Harley to betray his crew. Then they told the old club to leave town and a fight broke out at a mixed martial arts competition both groups attended. Guns were used in public.
.
The reason they went to Australia was to take over the drug trade in that area. The Hells Angels enforce for the crack dealers in Surrey central. I saw them. UFC is good. The Hells Angels are bad. We don't need them here and we don't need them involved with the mixed martial arts venue. Mom Boucher is not a nice guy. We don't need or want anything to do with him.
. 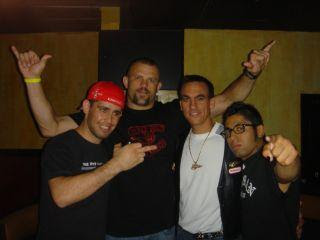