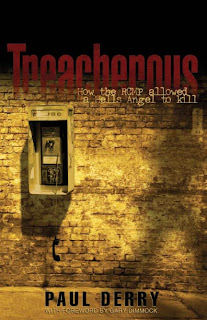 Since so many of these drug dealers get shot here is it so unrealistic to believe locals paid to have them killed out of the country? Dealing cocaine is without question a deadly business but let's face it, these guys want to sell their product. We are the ones fighting over who they sell it to.

One of the guys who drove down to meet Joe Bralic in LA was drug dealer Derrick Madinski. The Tyee reports that Madinski told the Vancouver court his drug deals started at $5,000.00 and soon escalated up to $80,000.00. In April 2001, Madinski said he witnessed Mihaly Illes shoot his friend Dowling in the head twice while the three were driving around in Dowling's van. The claim was Illes was upset Dowling, who was a crack addict, was stealing his product.

Madinski testified at Illes' trial stating that after shooting Dowling Illes cut off Dowling's head and dismembered his body while he watched. Then both of them burried Dowling's body in two separate locations in Squamish. Besides testifying to his part in the murder, Madinsky testified about his role in the cross border drug trade he was involved in that ended up killing Joe Bralic.

If Madinski was involved in the cross border bud for cocaine drug trade, which group was he with? The UN or the Hells Angels? He must have had an affiliation.

We know that Elliott Castaneda who was killed in Mexico had an affiliation. He was with the UN. But he was Mexican. Isn't it more likely someone from here hired the hit on him? The Hells Angels work with the UN but claim they're not welcome in the province and they will pound anyone who does business with them. Did the Hells Angels do the hit on Elliott to cut out the middleman and buy direct? Did the UN retaliate and have Gordon Kendall and Jeffry Ivans killed in Peurto Vallerta in retaliation since they were making connections for the Hells Angels?

That is clearly speculation but it makes you wonder. The bottom line is that the Hells Angels are exploiting kids like Gordon, Jeff and perhaps Joe. Those kids are dying while the Hells Angels who don't even ride motorcycles are profiting from the business without assuming any risk.

At the trial of contract killer Mickie (Phil) Smith the court was told one of his murders was done for the East Vancouver chapter of the Hells Angels. Smith killed Paul Percy Soluk at a crack house in Surrey and said a man he called Yurik helped him chop up and dispose of the body. Smith said "Yurik's not an Angel but he works with the Angels. I know he's done a lot of hits." http://www.canada.com/vancouversun/specials/websterawards/story.html?id=a42e5b7a-f7a9-42f2-b5fc-b48eb22a2983