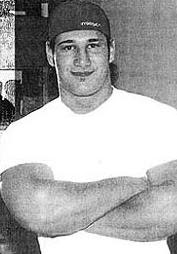 Joe Bralic wasn't a gangster, he's a casualty of war - the drug war. He didn't seem to have an affiliation. He appears to have been another body builder lured into the trap of easy money that wasn't so easy and paid for it with his life.

He's the guy that went to LA for a brief "holiday" and ended up dead. The Tyee wrote an in depth two part article about the mysterious event calling it the deal that killed Superman:
http://thetyee.ca/News/2004/05/15/The_Deal_that_Killed_Superman_Part_2/

Unbeknown to his family, the clean cut, well groomed body builder started selling pot. Innocent enough. Then he was trapped by the quick money that can be made trading B.C. Bud for cocaine in the U.S. and selling the cocaine back in Canada. This seems to be where all the huge money is made but the repercussions are deadly.

I see it as greed. Selling a little bud isn't good enough. The lust for dump hummers or expensive cars and a fast lifestyle causes people to drop their standards and sell crack. Even if it's indirectly, that is what the cocaine ends up getting sold as. Cheap and highly addictive creating addicts with broken lives that will kill their mother for five dollars for more crack. There is no honour in selling that kind of rat poison on the street.

So Joe Bralic goes to LA to make the deal. Seemingly the guy who set him up with people in LA is Anton Brad Hooites-Meursing, a local bad boy who attended the castle fun park event with the Bacon brothers and the IS.
Two other criminals Bralic befriended who actually went to LA with him were Garry Favell and Derrick Madinski. Bralic's body was dumped in an alley around 1:00 PM on a Thursday. That same morning Favell and Madinski had checked out of the same hotel into one down the street. They must have known something was up. They came back to Bralic's hotel around 3:00 PM and asked the maid for the key to his room so they could check on their "friend" who was not answering the door. Yet they left LA and returned to Canada without him and without filing a missing person report. With friends like those, who needs enemies.
It appears that Bralic met with the LA cocaine connection around noon. Some claim he was haggling over the price which is unlikely. Others claim it was a straight robbery which is more realistic. Since he had no gang affiliation, the LA drug dealers had nothing to lose by shooting him and taking all the BC bud while they keep the cocaine they were suppose to trade for it. Even more money for them. Think about it, people who sell crack have no morals. They are not trustworthy. Period.
The Tyee article explains that with a gang affiliation dealers are less likely to rob you and shoot you because your gang will retaliate. An informant for the article gave the Hells Angels as an example. Somewhat Ironic. However, Bralic didn't go to LA alone as was thought. Anton made the connection for him. If Anthon has ties to the bacon brothers and the IS maybe Bralic thought he did have the backing of a gang. Why would Anthon hook him up without a gang?
Why didn't Favell and Madinski come with Bralic to the meeting? Or did they? Why did they change hotels that morning? Why did they return to Bralic's hotel room after he was killed, gain entry and return to Canada without filing a missing person report? Why didn't his girlfriend who drove to LA with Favell and Madinski to meet him file a missing person report? Here I thought Matt the rat was bad. Seems like more birds of a feather.
The moral of the story is steroids don't make you bullet proof. Selling pot is one thing but as soon as you cross that line of trading B.C. Bud for cocaine to be sold as crack, the risk of ending up dead is dramatically increased. People who profit from the sale of crack have no morals and can not be trusted so matter what they say. Friends betray friends on a regular basis over the greed of a fast buck.
Last night they had the movie Boondock Saints on TV again. It's kind of a funny movie about two guys in Boston who end up killing two organized crime figures in self defense and go on to exterminate criminal trash who evade the law. It's funny if you look at all the murders like a non reality based western. However, as tempting as that may be, I don't support murder.
Maybe I'm just getting soft as I get older. I guess I just value human life. Murder is really serious. Life does not end at death. Committing murder isn't something we can repay or replace like stealing something from a store. Stealing a life is irreplaceable. You can't give that back and it effects parents, children and siblings forever. What we do in life, echoes in eternity.
We need to set standards and draw lines. I said draw lines not do lines. We need to stay away from the cocaine, crack and meth and we need to value human life more. Murder isn't any more glamorous then selling crack. It's cheap, dirty, senseless. We need to open our eyes and see that greed kills. It kills friendships. It kills people and it destroys lives. Buyer beware. http://www.laweekly.com/2004-04-29/news/a-kilo-full-of-kryptonite
.
Think about it. Bralic goes to LA to trade B.C. Bud for cocaine. Where did he put all the B.C. Bud, in his carry on? Not likely. His girlfriend flew out to Saskatchewan to meet up with Favell and Madinski who drove there from Vancouver. They drove across the border at North Dakota and met with Bralic who had driven there from LA. That's a long drive from LA. Then they all drive to LA together, his girlfriend in his car and Favell and Madinski in the jeep.
.
Do ya think that maybe the B.C. Bud was hidden in the jeep? Or at least picked up by the jeep after they walked it across and stashed it? If Bralic was trading Bud for cocaine, the Bud had to of come from somewhere. Favell and Madinski are the prime suspects. Was Joe Bralic robbed by a LA dealer or betrayed by his own people like so many others in the Vancouver drug war.
.
Interesting to note that the Tyee claims the Hells Angels had tried to recruit Bralic for Ultimate fighting and attended his funeral. If the Hells Angels tried to recruit Bralic for Mixed Martial Arts and attended his funeral and if the Independent Soldiers and crew from the castle fun park meeting are linked to the Hells Angels, who realled killed Joe Bralic? People who profit from exploiting these kids are just as guilty as those that do the hit.
Posted by Dennis Watson at 5:41 AM