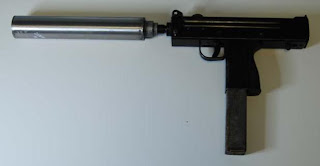 Look what they pulled out of the Fraser River. Not another body. This time is was an automatic weapon. We've all heard about the Saturday night special. A small handgun that has a short barrel and isn't very accurate but is easily concealed. Well this is a Vancouver Special. http://www.vancouversun.com/news/Police+trace+deadly+machine+pistol+linked+Vancouver+gang+shootings/2082564/story.html
Did ya see the movie, Grand Torino with Clint Eastwood? Well there's a funny scene in the movie of two cars of gang bangers beaking off to each other. One guy pulls out a gun as if to say shut up and walk away while a guy from the other group pulls out an Uzi and shouts "How many bullets you got?" http://www.youtube.com/watch?v=0Mm3KGitZfQ
Funny in a movie but not so funny in real life. This compact machine gun with a silencer was found floating down the Fraser river and was used in some gang related shootings recently. You're got to admire the firearm. They're small, very fast but not that accurate because of the short barrel. Add the silencer and you lengthen the barrel and the bullets have a straighter trajectory. Ingenious actually.
But what ever happened to Chris Tucker's put your gun down and fight me like a man? Now it's like homeboy brought a knife to a gun fight. Some guy pulls a gun, someone else pulls out a bigger gun, then someone pulls out a machine gun. Then someone like Randy Potts pulls out one of his hand grenades and someone like the Bandidos pulls out one of their rocket launchers and everyone starts to blow sh*t up. That is f*cked up.
.
Like I said it's the same mentality as swarming. A group of guys swarm someone, bear spray them, then give him the boots. There is nothing manly about that. People who swarm are asking to get swarmed. I remember one kid tell me they were always nice to geeks in high school because you never know if they were going to snap and come back with a gun to shoot everyone who made fun of them.
.
All the gun violence is messed up. Not only because it isn't manly but because it's over the right to sell crack and crystal meth. That is messed up. Completely.