Brenda Butterworth-Carr takes over BC RCMP 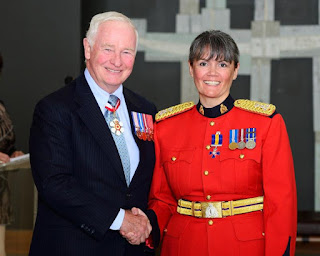 Well this is a shocker. CBC is reporting that "The RCMP in British Columbia have named Assistant Commissioner Brenda Butterworth-Carr as the division's new commanding officer. Butterworth-Carr, from the Tr'ondëk Hwëch'in Hän Nation in Yukon, will be the first Indigenous woman to hold the top RCMP job in the province."

Looks like the Friends of Craig Callen are finally starting to falter. Let's hope her first order of business is to fire Bill Fordy. Bill Fordy isn't corrupt, he's just an idiot. The corrupt ones in power promote him because they know he won't do his job and let them get away with drug promotion.

The biggest problems in the BC RCMP come from the left over Gordon Campbell government. When I was doing volunteer work in south Seattle during the US crack epidemic back in the /80's, every time a police officer started enforcing the law by putting pressure on the crack dealers they were transferred out of the area. I saw it. Chuck Pillon was one of them.

The same thing has happened to the Gang task force in BC.