Another shooting in East Vancouver 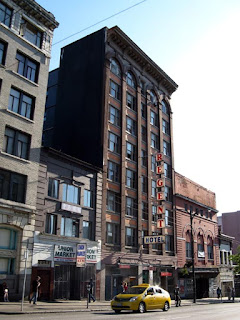 News 1130 is reporting that "A suspected shooting inside a Downtown Eastside hotel is the latest in a string of violent events to hit Vancouver in recent days. Officers were called to the Regent Hotel on 160 East Hastings Street at around 2:30 p.m. for reports of gunshots. They found one man inside who appears to have been shot. The man was sent to the hospital in serious condition. No other details are being provided. The apparent shooting comes less than 12 hours after a 19-year-old man was stabbed to death on East Hastings Street, the city’s third homicide in less than a week." Crime stats in the DTES have been drastically suppressed after they closed down public access to the police station there.

This is what we refer to as a New York Minute where several different things are happening all at once. Yesterday there was a fatal shooting in Surrey and another shooting in North Vancouver.