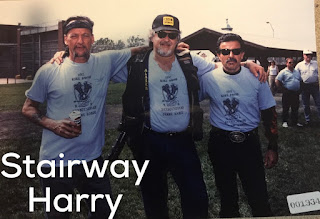 George Christie has started blogging on his website under stories. Most recently he has made a post about a Penitentiary bike show back in 1992. He states that the show was sanctioned by the prison recreation department, and sponsored by both the Hells Angels and Outlaw members that were doing time together. It was an unwritten rule and common knowledge that any problems on the street that different outlaw clubs might have, stayed on the street and didn't bleed over into prison life. It was a smart arrangement, and one that over the years served all outlaw bike clubs well. This defined his beef with Sonny and the clone soldiers. They wanted conflict with the other clubs and George saw it as bad for business. I have to agree with George on that one.

Posted by Dennis Watson at 8:23 AM