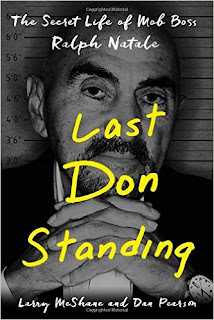 I have an interesting book in front of me that just crossed my desk. It's called Last Don Standing: The Secret Life of Mob Boss Ralph Natale by Larry McShane and Dan Pearson. It's not due to be released until March 21st but you can preorder it on Amazon. The publisher sent me a copy so I got a sneak peak before it was released. Larry McShane is a crime reporter that writes for the New York Daily News. Dan Pearson is a producer from Brooklyn. Ralph Natale was a bonafide leader in the Costa Nostra. Everyone knows the Costa Nostra is the real thing.

The Philly dot com is reporting that Former Philadelphia mob boss Ralph Natale – believed to be the first sitting La Cosa Nostra boss to testify against his own crime family – is finally releasing his tell-all memoir this month. So that means this book isn't just about him it was written with his assistance. It's not often a book has a movie deal before the book has been released.

Deadline dot com is reporting that: "The Last Don Standing, the book that recounts the life of Philadelphia Mob Boss Ralph Natale, known as one of the only La Costra Nostra bosses to flip and become a federal witness, is being developed as a feature film and a starring vehicle for Frank Grillo. The book from New York Daily News reporter Larry McShane and producer Dan Pearson, compiles Natale’s frank accounts of the murder of Bugsy Siegel, Jimmy Hoffa’s final days, the mob’s takeover of Atlantic City."

Everyone knows that I'm not a fan of police informants. I do believe law enforcement has a need for police informants, that's just not my thing. However, the reason I am endorsing this book is because this case is different. Ralph Natale wasn't some two bit drug dealer that ratted out his boss to get a reduced prison sentence. Ralph Natale was the boss. He was a legitimate Don in the Costa Nosta who expposes how he was betrayed and went into witness protection. It is a real life story similar to the Netflix series Lilyhammer. Lilyhammer was a hilarious series about a New York mobster who went into witness protection because he got screwed over by his own family so to speak. When they asked him where he wanted to go he said Norway because he saw it on the Winter Olympics and thought it would be a nice place to settle down.

So the big city publishers in New York gives the Gangsters Out News Syndicate an exclusive by showing us an inside look at the book before it's even published. What an honour. This guy is no Justin Bieber bitch. He is the real deal. Finally an inside look at how the business is supposed to run with dignity before the spineless dirtbags ruined it with betrayal and greed.

Philadelphia has a lot of history. Not only was it the birthplace of the Rocky movies, but it is also the home of the Liberty Bell and where the Declaration of Independence and the US Constitution were debated and signed. When people think of organized crime they first think of New York and Chicago. Philadelphia is right beside New York City. The crime family in Philadelphia was one of the most active American Mafia families outside of the Five Families of New York.

Mob Boss Ralph Natale was the Don. He was the one that ran the entire enterprise. When he went to prison his underlings didn't give his wife a dime. She was left with no income at all. Like WTF? In the book Ralph Natale clarifies "I became a government witness. I never wore a wire. I never entrapped anybody." He ended up doing more time than the people he testified against.

"Natale mourns the loss of the old Mafia, the world where he grew up. The whole thing was killed by men who were never satisfied with their position or their riches, men without respect for the Life or their own lives. Greed destroyed everything." It always does. Peace.

Posted by Dennis Watson at 7:16 AM