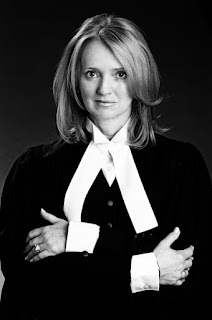 The Vancouver Sun is reporting that "Citing an 'extremely shorthanded' judiciary, a B.C. Supreme Court judge Monday urged two lawyers to attempt to complete a two-week rape trial in five days, suggesting the prosecutor not call two Crown witnesses and limit questioning of the complainant."

"B.C. Supreme Court Justice Peter Leask, who lives and usually sits in the Lower Mainland, also said he would rather be home than in the Interior. 'Full disclosure: I live in Vancouver,' the judge said. “Kamloops is a wonderful place, but I like sleeping in my own bed.” The trial relates to allegations of ongoing sexual assaults of a teenaged girl by her stepfather in Adams Lake dating back to the mid-1970s. The stepfather is facing four charges, including rape and sexual intercourse with a female under 14 years old."

Peter Leask wants to fast track a rape trial and deny two witnesses because he is inconvenienced by having to hear the case in Kamloops when he lives in Vancouver. Fire Him! We all remember Peter Leask. He is the one that gave a Hells Angels associate house arrest for trafficking cocaine. He also let a full patch Hells Angel off when the police caught him red handed loading 52 kilos of cocaine onto a truck from His storage locker. The fact that Peter Leask is still a BC Supreme Court judge is a crime against humanity and proves things need to change.

Canada dot com printed an article by Georgialee Lang discussing why we need to elect judges in Canada like they do in the United States. Georgialee Lang is a Vancouver based lawyer who has her own blog called the Law Diva. She even has a religious affiliation.

Personally I'm not completely sold on the need to elect judges although I am not opposed to it. What we really need is a mechanism in place to get rid of bad judges because right now we have none. The fact that Peter Leask is still on the bench until he faces mandatory retirement at age 75 clearly shows the system is broken and needs to be fixed. I'm not the only one that thinks so.

Update: The Vancouver Sun is reporting that after Peter Leask denied the Crown's two star witnesses, the crown was forced to stay the rape charges. That is obscene. The Times Colonist is reporting that a complaint against Peter Leask has been filed with Canadian Judicial Council and well it should. When one bad cop does something wrong it makes all cops look bad. Likewise when one bad judge does something wrong it brings the entire judiciary into disrepute.