A dramatic rescue and a senseless fatality 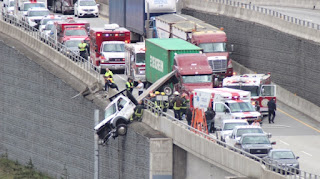 There was a dramatic rescue of a driver trapped in the cab of a flat deck that was hanging over the edge on an overpass near the Surrey Delta border. The driver of a rig hooked up a chain from the flat deck to his rig so it wouldn't fall over the edge and rescue workers moved into position. Well done souljas. Saving lives one day at a time.

In contrast a traffic camera showed a different car scream through a led light right through a busy intersection at full speed in Surrey. It then t-boned another vehicle and killed one of the occupants. Police believe alcohol was a factor in the accident. What a tragedy.

One would think if someone had a bit too much to drink, they would drive slow to compensate. There was another woman in Surrey who went screaming through a red light and t-boned another vehicle. Witnesses from the Gala said alcohol was a factor in that accident as well. Only she lied and said the other party ran the red light. Locals knew that wasn't possible because at that intersection she would have had to have come to a complete stop to trigger the demand light. That woman went on to become a conservative MP.