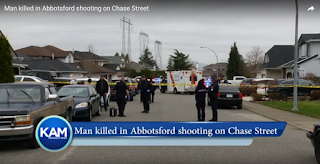 Evidently there was a fatal shooting in Abbotsford yesterday. The Abbotsford News is reporting that "the victim of the fatal shooting Friday afternoon on Chase Street is Jaskarn Lally, an associate of two Abbotsford men previously gunned down in gang-related killings. The shooting took place at about 4:30 p.m. at a home in the 3500 block of Chase Street. Sgt. Judy Bird said police were called to a residence, where they located a 20-year-old man suffering from gunshot wounds. He was pronounced dead at the scene. Bird said the incident appears to be targeted."