Quebec and BC Corruption 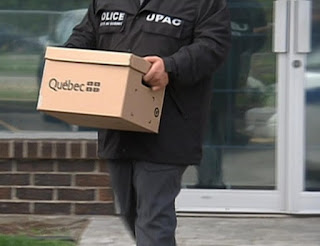 CBC is reporting that "The deputy director of the Montreal police service (SPVM), Bernard Lamothe, has been relieved of his functions for the duration of an investigation into allegations that the police force fabricated evidence to silence whistleblowers."

Former deputy minister of Justice, Michel Bouchard will lead an investigation into the allegations. That article doesn't clarify what the whistleblowers were reporting on but a previous article states Quebec's public security minister is launching an inquiry into what he is calling "systemic" problems within the Montreal police service.

Another article clarifies that Jimmy Cacchione and Giovanni Di Feo were police officers for decades, often working undercover while targeting Hells Angels and the Mafia. In 2012, the officers say they launched their own investigation about possible corruption within the force, looking at officers possibly receiving money from the Mafia.

"We noticed that a few individuals were committing crimes, and we notified the chief at the time, but nothing was moving," Cacchione told CBC News on Wednesday, referring to former Montreal police chief Marc Parent. The officers said they were called to police headquarters where they expected they would be given a chance to explain. Instead, they said, they were suspended and told they were being investigated by the RCMP. "When I was suspended, that information was in my bag, so they seized it and nothing happened after that," Cacchione said.

A little Grant Wakefield déjà vu non? Grant was a whistleblower in BC that reported inappropriate conduct of Coquitlam RCMP officer Jim Brown who was tied to the Pickton investigation. The Coquitlam detachment kicked in his door with a search warrant, seized all his hard drives and evidence, then wiped them clean before returning them to him. That was a criminal act.

Meanwhile back on the ranch, the Globe and Mail is reporting on the article about BC Political corruption that was reported on in the New York Times. The only difference between Quebec and BC politics is that Quebec has task forces that investigates corruption and organized crime in politics while BC does not. That is a huge concern.