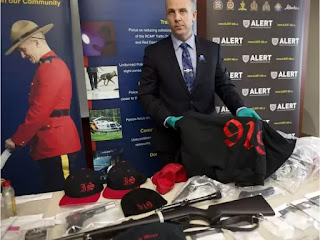 CBC is reporting that Two men with suspected ties to two gangs - the Independent Soldiers and the Red Scorpions - have been arrested on drug charges in Red Deer, Alta., following a three-month investigation, police say. Two firearms were seized along with a trace amount of drugs as well as Independent Soldier gear. 919 refers to the letters IS.

As we all know locally, the Independent Soldiers and the Red Scorpions are puppet clubs that sell drugs for the Hells Angels. The Red Scorpions used to work for the UN until the Surrey Six where Jamie Bacon and a few associations executed the former leaders after they made sure they were disarmed first. The Bacon brothers are notoriously hated in Surrey for being complete rejects.

Nobody uses the Red Scorpions logo anymore because the swine flu made it look like a cheap karate school. Welcome to the finger and the thumb. Next they'll be carrying around fuzzy trolls.