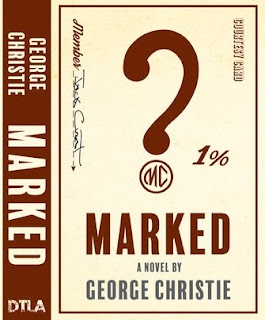 This summer George Christie is releasing a new book "Marked" which is a fictional account of a soldier returning from Vietnam trying to find himself back home only to discover how the outlaw movement has changed in is absence. Greed and corruption has entered both sides of the conflict creating a new battle field he has to confront. Now that's what I'm taking about:

"The outlaw bike movement was born on the heels of World War Two by the returning veterans in Southern California. What started out as a esoteric sub culture has grown into a world wide phenomena. Whether renegade free spirits or as law enforcement describes a well oiled crime syndicate, they can no longer be ignored. If history has taught us anything, its history repeats itself and with each wars end a new batch of returning veterans must find themselves. This is one of those stories. Follow ​Marine Scout Sniper Jack Crest as he returns from the jungles of Vietnam, only to find little left that he can call home. His parents having died in a tragic accident, Jack picks up the pieces with old friends in the outlaw biker brotherhood."

"Rejoining the Question Marks motorcycle club, he discovers that the outlaw world that has changed radically in his absence. The Marks have spread across the United States and battles for territory and zealous law enforcement persecution have become part of club life. Jack soon finds that he has left one war behind, only to place himself in the middle of another. Haunted by a league of lost souls he dispatched in that faraway land, he seeks peace for himself and the club. But local law enforcement, secretive federal officials, and even his own club brothers conspire against his efforts and endanger his leadership and his life. Ultimately he’ll have to decide between leading an unwilling club down the long, hard road to peace, or giving in to his demons and destroying everything in his path."

Posted by Dennis Watson at 8:43 AM