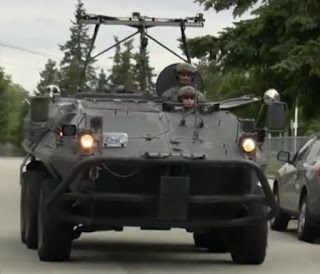 Global is reporting that "Two shootings led police to a home in Newton Tuesday morning, resulting in a heavy police presence in the neighbourhood and a school closure. At 12:15 a.m. Tuesday, police received a report of shots fired involving two vehicles near 125 Street and 80 Avenue. Police found bullet casings at the scene but the vehicles were gone."

Then, at 12:18 a.m., Surrey RCMP were called to the 13200-block of 67B Avenue following a drive-by shooting. Police say it appears a parked vehicle was the target. No injuries have been reported in this incident either. “The police believe the two shootings are linked and the parties involved are known to each other,” says Cpl. Scotty Schumann in a release. “Fortunately no injuries have been reported.”

So the next morning the police close an elementary school and bring out armoured vehicles?