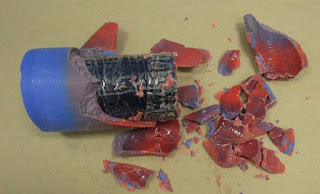 Global is reporting that "Authorities in New Zealand say a 36-year-old Canadian man has been arrested after customs officers allegedly found 4.8 kilograms of methamphetamine hidden in a shipment of candles." That would be crystal meth which is like speed but it's not. Crystal meth is made with drano in a basement and is toxic. We're waiting for the name to be released.