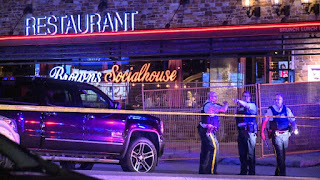 News 1130 is reporting that there was fatal shooting in Langley last night. CBC is reporting that "The attack happened outside the Browns Socialhouse restaurant near Willowbrook Mall just before midnight Friday. Multiple people phoned 911 after hearing gunshots coming from the parking lot. "We showed up and found a body beside the black Dodge truck, lying face down, head wound, deceased at the scene," said Mike Connaghan, who ran to the area from a nearby Tim Hortons. Connaghan said one of the victims went back inside after getting shot."

CTV is reporting that "The deceased has since been identified as 31-year-old Tyler Joseph Pastuck, a Victoria resident who knew the other victim. One woman, who doesn't want to be identified, was sitting at the bar when stray bullets burst through a window."