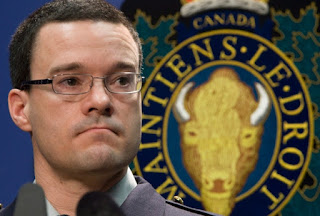 The Peace arch News is reporting that "Former RCMP spokesperson Tim Shields’ trial has been delayed until Wednesday. Shields is charged with one count of sexual assault. According to Criminal Justice Branch documents, the charge is a result of an investigation into sexual misconduct between 2009 and 2010. The complainant was a civilian employee with the RCMP who worked in coordination with Shields in his role as Officer in Charge of the strategic communication division of E Division. The trial is set to last for three weeks."

There was an accusation of a female officer being raped by a male officer during the 2010 Winter Olympics. I'm not sure if this is that accusation or an additional one. We shall wait and see.

Update: I need to find the link online but today's Vancouver Province reported that the sexual assault occurred within a locked bathroom at the former RCMP Headquarters where he started kissing her, touching her breasts, exposing himself, touching her hand and placing her hand onto his exposed penis.”

Global reported that "Retired deputy commissioner Craig Callens said previously the Mounties became aware of allegations of sexual misconduct against Mr. Shields in 2013, but an investigation could not proceed because of a lack of evidence. That changed in 2014 after new information came to light Callens said."

Craig Callen is a liar. Charges did not proceed because he swept them under the carpet as he had a history of promoting officers with a history of sexual harassment. That is why the famous swingers within the force were called the FOCCers - Friends of Craig Callen. That is why he promoted Bill Fordy.