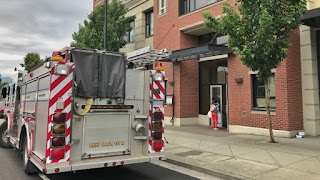 CBC is reporting that "Vancouver Fire and Rescue Services and Vancouver police have been called to an apartment near Knight Street and Kingsway in Vancouver to investigate two sudden and suspicious deaths. When crews were called to the location in the 4000 block of Knight Street this morning, they found one person requiring medical aid, and two people who appeared to have died suddenly, according to Jonathan Gormick of Vancouver Fire and Rescue Services. 'Both the hazardous materials team and Vancouver police are on scene and determining the next steps,' said Gormick." The Breaker News reported that it was an apparent drug lab.