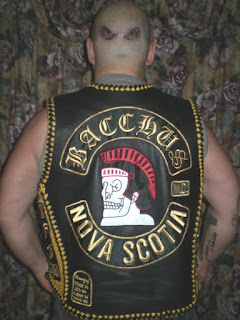 CBC is reporting that "Three Nova Scotia members of the Bacchus Motorcycle Club have been sentenced to jail terms ranging from 18 months to three years on charges of extortion and extortion as members of a criminal organization." Patrick James is the flaming idiot with bad ink.

The punk ass b*tches were threatening a guy for starting a chapter of the Montreal-based Brotherhood Motorcycle Club in Nova Scotia. Buttkiss has NO right to tell any non criminal MC they are not allowed to form. These are the f*ck ups that did the same thing to a couple of senior citizens at a Tim Horton's in New Brunswick for starting a non criminal Christian MC. These guys are complete losers. Cover that tacky sh*t up with some real ink will ya. Hillbilly. 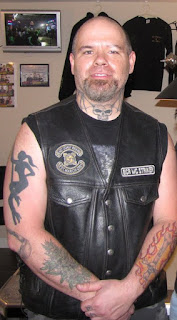