Fatal shooting in Abbotsford, shootings in Surrey and White Rock 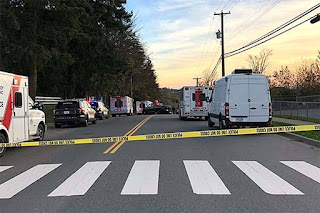 The Abbotsford News is reporting that "A 19-year-old man has died following a shooting that occurred this afternoon in the area of Ross and Simpson roads in west Abbotsford."

The Peace arch News is reporting that "Surrey Mounties investigate drive-by shooting in Fleetwood. It happened Monday afternoon in the 8000-block of 153A Street. Police say no victim has been located."

18-year-old to hospital after shots fired in White Rock

The Peace Arch News is reporting that "Police are investigating after a young man was shot early Sunday in White Rock. Staff Sgt. Daryl Creighton confirmed the incident happened just after midnight. Police responded to “multiple complaints of shots fired” in the 15500-block of Columbia Avenue, Creighton told Peace Arch News Monday morning. “Police responded and found evidence of a shooting, however no victim was located. While patrolling the area, police located the 18-year-old, male victim several blocks away.” The victim was taken to hospital."