Shunning the Alt Right AND the Alt Left 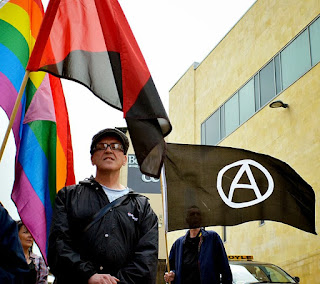 Recently Jason Kenney, leader of the United Conservative Party in Alberta, took some heat because of a comment John Carpay, a UCP member made about totalitarianism.

John Carpay simply said: "How do we defeat today's totalitarianism? You've got to think about the common characteristics. It doesn't matter whether it's a hammer and sickle for communism, or whether it's the swastika for Nazi Germany or whether it's a rainbow flag, the underlying thing is a hostility to individual freedoms."

Let's be clear in that he did not say swastikas were good, he said the opposite. He wasn't waving a swastika, he said swastikas are bad. They represent totalitarianism just like the Communist hammer and sickle does. It is just as important to shun the alt left as it is to shun the alt right even more so because the alt left is just as dangerous and are hiding among us.

Anarchists and Communists represent the Alt Left. Many of them hide under the rainbow flag to promote their insane agenda. In Derry, the town I loved so well, some have started to wave Communist and Anarchist flags along side the Rainbow flag. That is the kind of extremism no socially responsible person would ever endorse.

In Ireland the black flag was a sign of protest recording one's dissent. Now wingnuts have hijacked that tradition and use it to represent anarchism. That was never the original intent of the tradition. That is a direct violation of the Irish Proclamation supporting a free republic.

In Michigan a gay anarchist group called Bash Back stormed a church and disrupted their service. In Syria, an Anarchist paramilitary group raised the LGBTQ Pride flag and said "These Faggots Kill Fascists!" The black and pink flag represents Queer anarchism which is as John Carpay said, totalitarianism. I do not support that and neither should you. 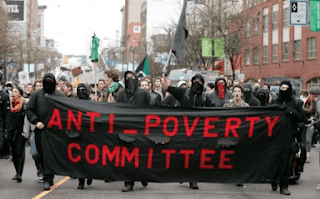