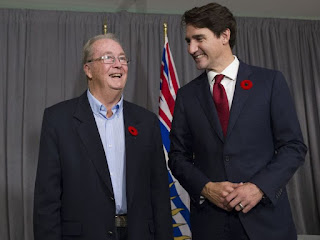 Prime Minister Justin Trudeau sat down briefly with the incoming mayors of Vancouver and Surrey today to discuss the top issues in BC’s two largest cities.

"Asked if the federal government would spend any additional money in Surrey to build a SkyTrain line, Trudeau said: “Our approach on infrastructure projects has never been that Ottawa knows best. We always have believed that working with folks on the ground, locally elected representatives who tell us and who know best what the needs of their communities are.”

Maybe there's hope for Justin Trudeau after all. That is consistent with what Wake up Surrey reported and a direct contradiction from what Harold Munro reported during the election and right after the election. I guess in the end, truth does prevail.