Wake up Surrey on election Propaganda 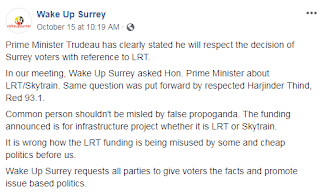 Wake Up Surrey is reporting that: " Prime Minister Trudeau has clearly stated he will respect the decision of Surrey voters with reference to LRT. In our meeting, Wake Up Surrey asked Hon. Prime Minister about LRT/Skytrain. Same question was put forward by respected Harjinder Thind, Red 93.1. Common person shouldn't be misled by false propoganda. The funding announced is for infrastructure project whether it is LRT or Skytrain. It is wrong how the LRT funding is being misused by some and cheap politics before us. Wake Up Surrey requests all parties to give voters the facts and promote issue based politics." That includes you Harold Munro.

Harold Munro is not credible. He is knowingly printing false information about the LRT in his cheap tabloid of corporate trash. Fire him, fine him or jail him. Take your pick. His printing of false information about the LRT and Skytrain choices during the election constitutes advertising and is therefore governed by the elections campaign financing act.