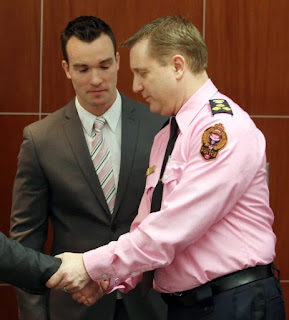 First we heard that suspended Victoria Police Chief Frank Elsner resigned but unlike in Jim Browns case, the disciplinary hearing continued after he resigned. Then we hear that "Although Elsner resigned in May 2017, his service record will now show that he committed eight acts of misconduct under the Police Act which would have resulted in his dismissal from policing."

"Two retired judges acting for the commissioner determined that Elsner committed six acts of discreditable conduct, including three of workplace harassment, one act of deceit and one act of inappropriate use of police equipment. “I have concluded that the decisions and discipline proposed by the retired judges are well reasoned and appropriate … Therefore, there is no need to call a public hearing on these matters,” said Lowe. Since his resignation, Elsner has launched a cannabis consulting business - his profile on Linked In says he is principal consultant for UMBRA Strategic Solutions, which provides security consulting to marijuana businesses.

More cop pot. I wonder if he's going to start working for Andy Richards? Does that means cops who sell pot are not allowed to enter the US? Now two local mayors are complaining that the report implicates them by stating "In the report released Sept. 26, Lowe said Helps and Desjardins predetermined the outcome of the internal discipline process from the outset, and set about navigating a course to allow the former chief to remain in his post.”

Frank Elsner is from Sudbury where he "associated with criminals and partied with drug users, bikers, and hookers. He set up elaborate drug deals, disappeared for weeks on end, was involved in a hitman operation, and had multiple aliases." This is an example of an undercover cop who goes undercover not because he hates crime because he covets that life. I do not. There is nothing in that life that appeals to me and I think married cops that go undercover to infiltrate the bikers gangs because they covet that lifestyle are trash.

Posted by Dennis Watson at 6:24 AM