Cops on Pot: Is pot bad for you? 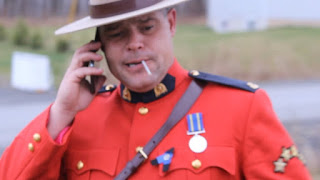 We've talked about cops selling legal pot and we've seen what happens when cops consume illegal pot. Now with legalization under way we need to talk about cops on legal pot. Global is reporting that "The president of the union representing Toronto police officers says a draft policy put forward by management banning members from consuming marijuana within 28 days of reporting for duty is "fraught with all kinds of issues and legal challenges."

I agree 28 days appears to be an arbitrary number and I agree it presents legal challenges but the fundamental question is, are employers allowed to discriminate against hiring employees that smoke pot? My response is why not? When pot becomes legal is it an employer's right to say they rather not hire someone who smokes pot? I say it is. Supply and demand might make it hard to find employees in BC who don't smoke pot but it is well within their right to set that standard.

Especially in policing. It is well withing an employer's right to say we don't want to hire anyone who smokes pot because discrimination against drug use is not prohibited grounds. The Guardian is reporting that "Vancouver, Ottawa, Regina and Montreal will let officers use it recreationally as Calgary introduced a zero-consumption policy."

Is pot bad for you?

I do believe that pot is one of the least harmful drugs out there. It is way better than crack or crystal meth. Way better. People who are addicted to crack would benefit from using pot to get off the crack. More so than methadone. I also believe that for alcoholics, smoking pot is better than drinking alcohol. Nevertheless, pot is not good for you.

Recently I saw a headline in the news asking is pot good for you and I thought to myself AYFKM? Have we Deevolved that much in our intellectual capacities that we have to even ask that question?

Anything that gets you stoned, baked or wasted is not good for you. Smoking anything is bad for you. That is why the leading cause of death in house fires is smoke inhalation. That is why all those health warnings exist on cigarette packages. Second hand pot smoke is just as bad if not worse than second hand cigarette smoke. Vaping is much better than smoking.

CBD is different than THC

There are two different main ingredients in pot. One is TCH the other is CBD. CBD is good for you THC isn't. THC gets you stoned CBD doesn't. In Washington State they have the percent content of these two ingredients posted on legal pot packages they sell.

Pot that is high in THC and low in CBD is recreational. Pot that is high in CBD but low in THC has some medicinal qualities. CBD helps reduce seizures in epilepsy. Yet once again smoking anything is bad for you. It causes lung cancer. CBD oil is the best of all of the options.

BC Bud has more THC than other strains of pot

Pot has much more THC now then it did when we were young. It's gone up from 3% to 15%. The smell is different. Pot used to have a pleasant aroma to it. Now it is harsh and smells like skunk cabbage. It literally smells like sh*t. "Oh but it's good sh*t." That depends on your perspective.

The reason why those cops went ape sh*t on the pot they ingested was because it was more powerful than the old stuff and ingesting pot makes it difficult to control the amount of THC you consume. You never used to get some of the bad LSD type side effects from smoking pot back in the day. You do now. Which makes the current propaganda pot's good for you so absurd.

So when pot becomes legal in a few days am I going to run out there and get wasted? Nope. I'm going to stay as far away from those lunatics as I can. I am internally defined. I don't need the government or a mob of stoners to tell me what's right and wrong. I make that decision for myself independent of the millennial circus clowns. Nothing has changed. Stoners are still stoners. We just have a lot more of them now.

I salute the Calgary Police force for setting a zero tolerance for pot use among it's employees. That is a noble standard. When the compromised EPS and BC Gang Task force start indulging in legal pot I only see their current level of corruption get worse through apathy and self indulgence.

Hemp Paper is good not THC

The only good that is coming from this tsunami of insanity is the fact that mandatory minimum jail sentences for possession of pot will be removed. That was a waste of tax dollars. Now we can focus on getting crack and crystal meth off the streets. The other good is the fact that now we can start investing in the hemp paper industry as that truly will save the planet. Hemp paper is a renewable market. That is sustainable. Hemp toilet paper makes sense.